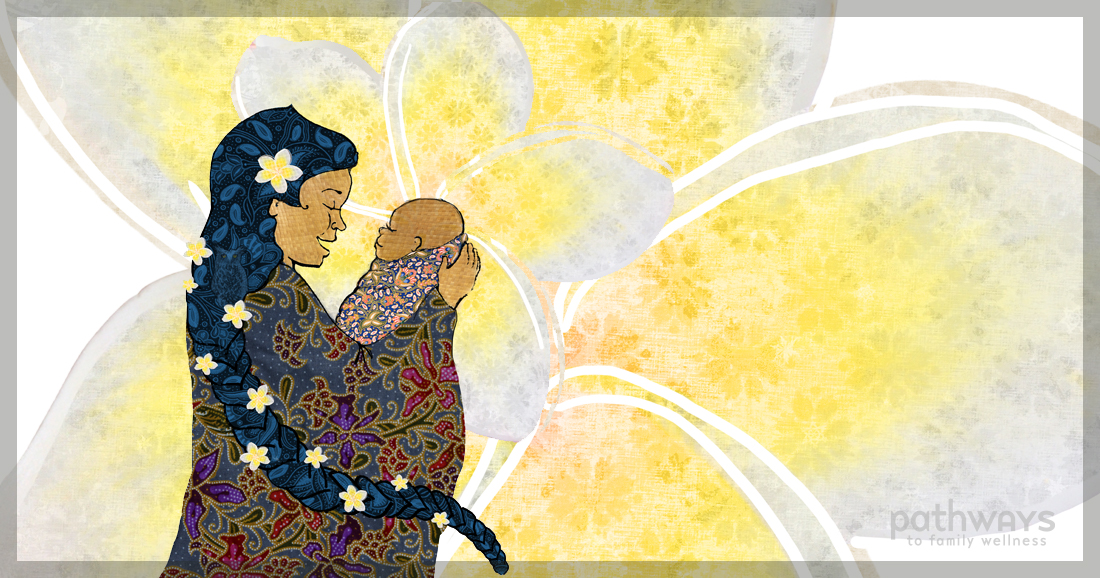 On one silent night in Indonesia, midwives greet each newborn with song.

It’s 3:33 a.m. at the Bumi Sehat (Healthy Mother Earth Foundation) birth center in the village of Nyuh Kuning, just south of the Monkey Forest, in Bali, Indonesia. There is a hush in the humid room. The first-time mother, Ayu, laboring in the waterbirth tub, has taken a break. With her head thrown back onto her husband, Gusti, she seems to float between worlds, between contractions, in a warm pool of flowers. She opens her eyes and says she must push. The midwives, Ibu Agung Mas, Ibu Ketut and I, encourage her to give it a try. In the dim light shining into the water, one midwife pushes aside the flowers, and sees that Ayu’s labia are beginning to part; soft black hair is showing. The midwives begin to softly sing the Gayatri mantra:

It is a hymn from the Rigveda, which every Indonesian school child sings in the morning. Every Bali Hindu Dharma temple, in every village, resounds with this simple song of greeting, which means: “May we bow to the excellent glory of God the divine rising Sun, as manifest in your Soul. May our prayers protect us from harming one another, on our journey home to the illuminated light.”

At just about 5 a.m., Esti, who has been laboring for two days with her first child, comes out of the birth tub, as she feels she will have more power to push if she’s squatting with her hands up on a bamboo ladder that the Bumi Sehat team has secured to a wall in the birth room. Earlier, when Ayu’s baby was born, Esti, who had been walking the short hallway, came in to congratulate Ayu, and to ask her for prayers. “The Lord listens to the tears of new mothers,” she said, and Ayu did pray. Now, not two hours later, Esti is fully dilated and, after a rest, she feels an incredible urge to push.

Esti and her husband, Josep, are a Christian couple. The midwives, now joined by Ibu Wayan and Gloria from Italy, sing in three languages:

Amazing grace! How sweet the sound,

I once was lost, but now am found,

Was blind but now I see.

It is the Balinese new year, Nyepi, and a day of complete and utter silence in Bali. After weeks of preparation, during which huge effigies of every imaginable kind of demon are made and paraded through the villages, then burned as a purification of evil the night before, Nyepi is a day of rest. It is believed that flying demons circle the planet on this one day in the moon calendar. If, during this particular 24 hours, the flying demons find the island of Bali deserted, they will leave the Earth in peace for another year. In Bali we take Nyepi so seriously that no cooking fires may be lit, so food is prepared the day before. Cars and motorbikes are not allowed to drive on the roads. At the crossroads, villages post satpams, men in black and white checkered temple clothing, to make sure that silence in maintained. When night falls on Nyepi, lamps may not be lit and no electric lights may burn. No airplanes are allowed to take off or land on the entire island of Bali. The people stay home with family and speak to one another in whispers. The only exceptions are medical emergencies and, of course, childbirth. For the birth of babies, even the demons are considered last.

On this particular Nyepi holy day, nine babies will be born at Bumi Sehat. Already a Hindu and a Christian baby have landed on earth. The next baby’s father, a Buddhist, chants during his wife’s labor, the prayer of the four immeasurables:

May all beings have happiness and its causes,

May they never have suffering or its causes;

May they constantly dwell on joy transcending sorrow;

May they dwell in equal love for both near and far.

Just as the baby begins to crown, the young father and the midwives join voices in the prayer of refuge. Even the young mother sings as she pushes:

(I take refuge until I am enlightened in the Buddhas, the Dharma and the Sangha. By the positive potential I create, may I attain Buddhahood in order to benefit all sentient beings.)

A family arrives, with a woman in full labor with her fourth baby. Clearly her waters have released, and birth will come quickly.

“Assalamu Alaikum,” the father-to-be cries as he walks with his arms around his wife in deep labor, bringing her toward the entry of Bumi Sehat. This means “Peace be with you.” The midwives answer, “Walaikum salam.” And upon you, peace.

The next two babies born are of Muslim families, and the voices of their fathers and mothers bring tears to the midwives’ eyes as they rise up singing: “Bismillah ar-Rahman ar-Raheem,” which means “In the name of Allah, most gracious, most merciful.”

As the babies of Islam emerge from their mothers, the family says, “Alhamdulillah,” meaning “Praise to God.”

Catholic devotees are rare in Bali; normally they come from Timor-Leste, the world’s youngest country, or Flores. This special day in Bali we have Ibu Maria and Ibu Reetah, one each from Timor-Leste and Flores. Both are married to men from Sumba, and both are expecting their third babies. As the births unfold, the Bumi Sehat midwives and nurse sing along to “Ave Maria” and I utter the Hail Mary prayer of my childhood:

pray for us now and at the

hour of our birth, Amen.

An expat expecting her second baby, Rebecca from Israel arrives with ruptured membranes and no labor pains. At many private hospitals in Indonesia they will induce a mom with premature rupture of membranes with a Pitocin IV drip and give the mom only six hours before giving her a cesarean. Rebecca is nervous and has not slept well for two nights. As she is only 32 weeks pregnant, we use a traditional Chinese treatment, moxibustion, on her feet and help her to sleep, which she does peacefully for a few hours. We learn that Rebecca’s husband is still en route to Bali, cruising somewhere approximately 30,000 feet above the earth. He will not make it in time, and Rebecca is terrified.

After a few hours of blessed sleep, Rebecca wakes in hard labor and the staff lights candles around the birth tub. We are all praying for a baby weighing more than two kilos, with perfectly mature lungs. As the baby comes gently, Rebecca, her daughter Alisa, and her best friend, Ana, sing:

Jory’s blond head crowns slowly, and as he is lifted up to the surface of the birth tub he gives a lusty cry. He breathes perfectly, and weighs 2,100 grams, so legally we need not transport him to neonatal intensive care. Jory is alert, but has no desire to suck, so over the next few days Rebecca pumps her breasts and we gently feed this wee baby with a syringe. His father, Aaron, arrives on the island 12 hours after Jory’s birth. We have not yet severed the cord. Aaron and Rebecca wait another day, and we help them burn the now dry and brittle umbilical cord. The family discusses leaving this son intact, uncircumcised, as a reinvention of their faith.

Before the Nyepi comes to a close, another Muslim and another Hindu baby are born into song at the Bumi Sehat birth center and family health clinic in Bali, for a total of nine babies in 20 hours! One mother hemorrhaged and required an IV drip to recover; this is quite common in Indonesia, where a leading cause of death is hemorrhage after childbirth.

The last Hindu baby born, late on Nyepi night, needed CPR. As I breathed for her, the midwives were singing. 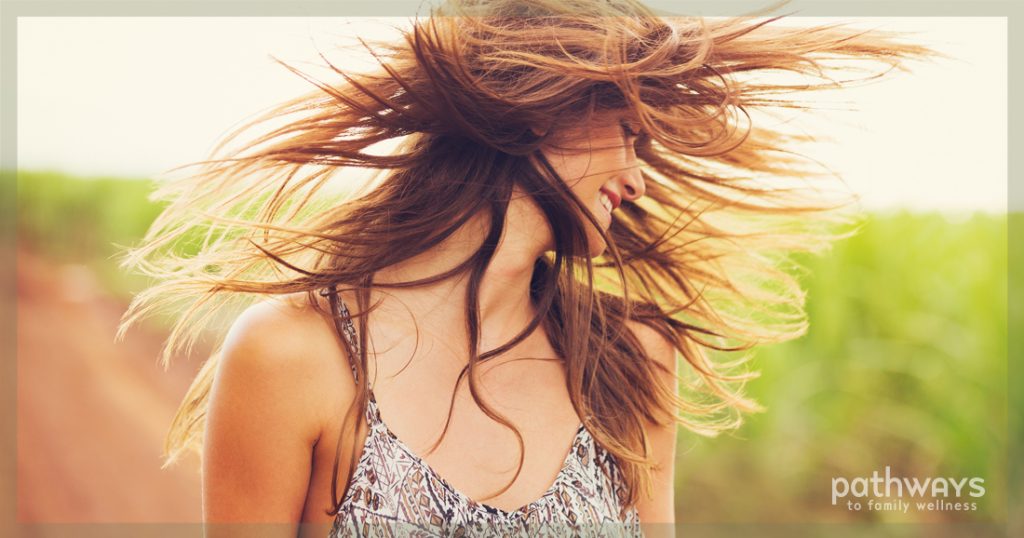 Otherism: Are You Not Selfish Enough?

By Dan SanchezHave you ever read How I Found Freedom in an Unfree World by Harry Browne? I finished it the... 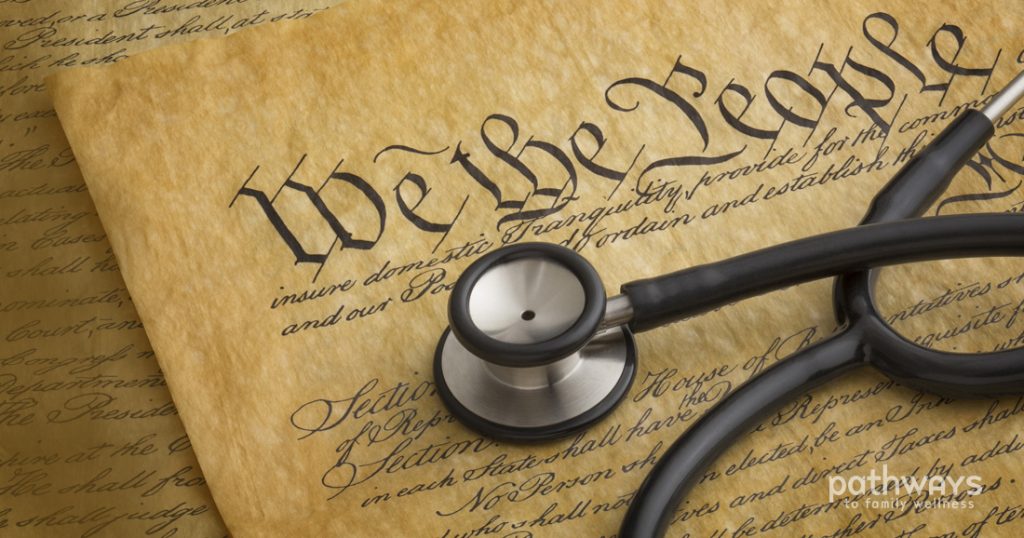 By Jay Warren, DCThe constitutional way to protect our health, education, and businesses. Whether you are male or female, single or married,... 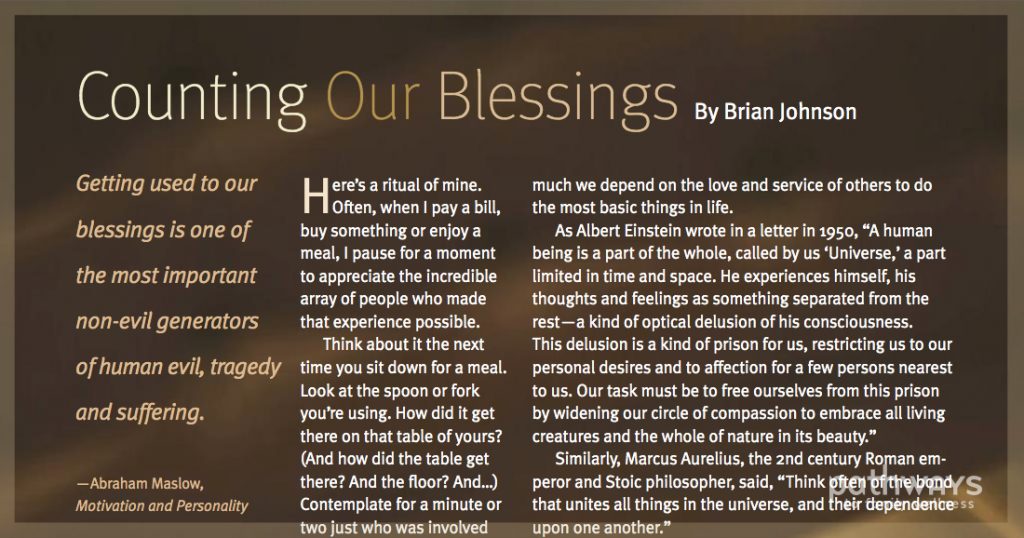 By Brian JohnsonGetting used to our blessings is one of the most important non-evil generators of human evil, tragedy and suffering.—Abraham...