Children, Cell Phones And Health: An Inconvenient Truth About A Convenient Technology 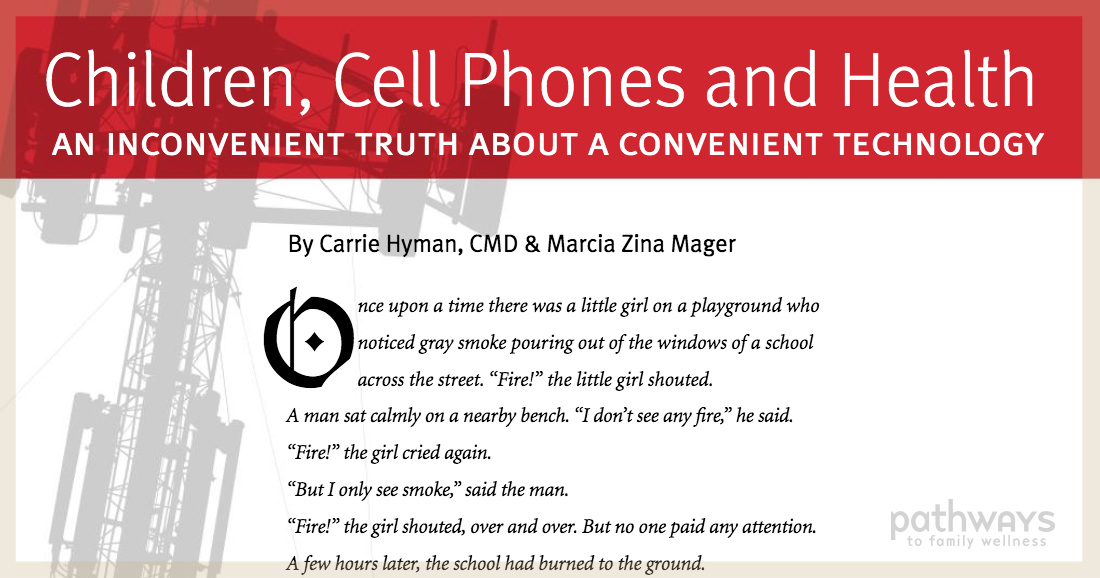 The moral of this story? Where there’s smoke, there’s a good chance you’ll find fire. That’s the precautionary principle practiced by most governments in Europe when it comes to protecting public health from the 4.2 billion cell phones in the world and the electromagnetic radiation they emit. Refusing to adhere to this “better safe than sorry” principle has caused catastrophic health and environmental effects globally, writes David Gee, an editor of The Precautionary Principle in the 20th Century: Late Lessons From Early Warnings. The book analyzes the dismal failures of governments around the world to respond to early danger signs in the environment, from rising levels of carcinogens to the depletion of Atlantic fisheries. In February 2009, Gee testified in Brussels at a European Commission workshop on electromagnetic fields (EMFs) and health. He warned about the profound danger posed by cell phone radiation—also called electropollution—which many scientists are now calling the “worst toxin in planetary history.”

“All truth passes through three stages. First, it is ridiculed. Second, it is violently opposed. Third, it is accepted as being self-evident.” —Arthur SchopenhauerBecause of this common-sense precautionary principle, France outlawed cell phone ads targeting children in January 2009. Many other countries followed suit: Russia’s Ministry of Health issued a warning that no child under eighteen should use a cell phone, and that pregnant women should avoid them completely. Israel’s health ministry and the Toronto Department of Health issued warnings as well. Germany, the United Kingdom, Belgium, India and Finland have all publicly discouraged children’s use of cell phones too. In contrast, what are we doing here in the United States? Exactly the opposite. Not long ago, Sprint signed a two billion dollar contract with Disney to market cell phones to children under twelve.

What is the health impact of 4.2 billion microwave-emitting devices on the human body and brain— wireless devices that were never pre-market tested for health?

“Electromagnetic fields (EMFs) and radiation damage DNA and enhance cell death rates and therefore they are a ubiquitous universal genotoxic carcinogen that enhances the rates of cancer, cardiac, reproductive and neurological disease and mortality in human populations. Therefore there is no safe threshold level.”—Dr. Neil Cherry, associate professor of environmental health, Lincoln University, New ZealandThere is a growing body of evidence—more than 2,000 independent studies worldwide—linking EMFs with serious health issues. These include autoimmune and neurodegenerative diseases like Alzheimer’s and Parkinson’s, developmental delays and spectrum disorders like autism and ADD, and various cancers, such as astrocytomas and glioblastomas. Award-winning cancer specialist and neurosurgeon Dr. Vini Khurana went so far as to declare that cell phones were more dangerous than smoking and asbestos. But this is not an article about giving up your cell phone, cordless phone, laptop, iPod, or Wi-Fi technology. That request would be impossible; eighty percent of our planet is already wireless. Cell phone towers now decorate the Himalayas.

The health risks posed by smoking and asbestos pale in comparison to cell phone radiation, which produces ICRWs (Information Carrying Radio Waves), precisely because our exposure to ICRWs is completely involuntary. We can choose to walk out of a smoky bar or re-insulate an asbestos-laden home, but there’s no way to completely avoid electromagnetic radiation. One might say this has become a civil liberties issue because our exposure is non-optional. That may be why parents and teachers in Europe have marched in the streets, demanding wireless be removed from schools.

Microwave radiation, in fact, passes through everything between the cell tower and your phone (or computer) at the speed of light (186,282 miles/second) and is instantaneously absorbed into your body and brain. The compelling research from Dr. Om P. Gandhi, a professor and chair of electrical engineering at the University of Utah, dramatically illustrates this: When an adult makes a cell phone call, there is 30 percent radiation penetration into his brain. Children fare worse. There is a 50 percent radiation penetration into the brain of a 10-year-old, and 75 percent radiation penetration into a 5-year-old. Professor Leif Salford, who headed the research at Sweden’s prestigious Lund University, writes, “the voluntary exposure of the brain to microwaves from handheld mobile phones is the largest human biological experiment ever.”

It’s not just human cells at risk. Dr. Robert Becker, a two-time Nobel Prize nominee, and Dr. Neil Cherry, associate professor of environmental health at Lincoln University in New Zealand, believe EMFs may be permanently damaging all DNA material, including that of plants and animals, thereby affecting the genetic integrity of all life on earth.

“I have no doubt in my mind that at the present time, the greatest polluting element in the earth’s environment is the proliferation of electromagnetic fields. I consider that to be far greater on a global scale than warming…and the increase in chemical elements in the environment.” —Nobel Prize nominee Dr. Robert O. Becker, from his book Cross CurrentsChildren and teenagers are most at risk due to their developing brains and skulls. In Sweden, Dr. Lennart Hardell, M.D., Ph.D., studied teenagers on cell phones and found they are five times as likely to get brain cancer by the time they reach their mid-twenties. (Cordless phone radiation gives them a four-fold risk.) A Spanish study headed by Dr. Michael Klieeison demonstrated that a two-minute cell phone call disrupted the electrical activity in a child’s brain for up to two hours. How many minutes do American teens spend on cell phones? An average of 2,600 minutes each month.

Fortunately, there are actions you can take to mitigate the harm posed by EMFs. Thomas Jefferson insisted a free society cannot exist without an informed public. So whether you’re a parent, a teacher or simply a concerned human being, educating yourself is the first step. Then you can make the best decisions to support the long-term well-being of your family—and this planet.

Ways to Thrive in a Wireless World

About the Author:Carrie Hyman, CMD, is a doctor of Chinese medicine and a licensed acupuncturist. Marcia Zina Mager is a journalist and international author (marcia-zina-mager.com). For more information, visit healthycell.org or contact Marcia at 800-200-4317. 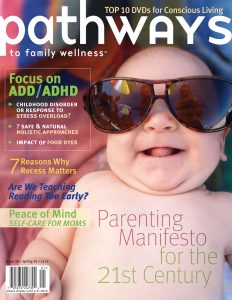 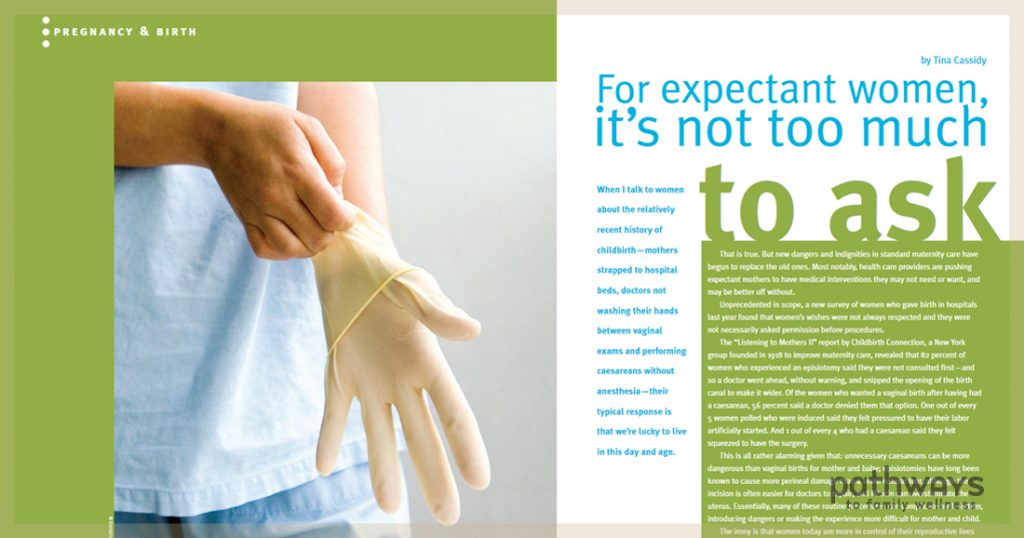 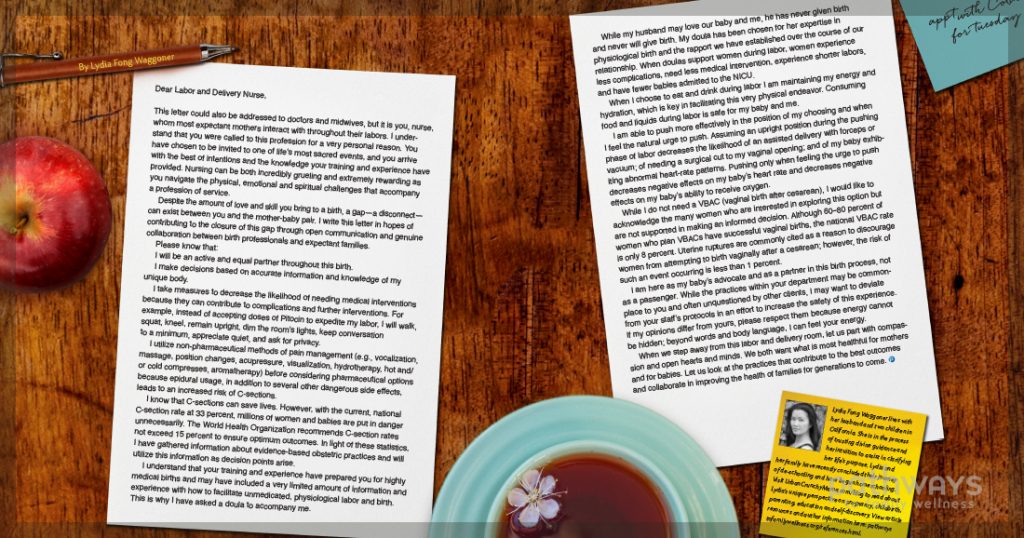 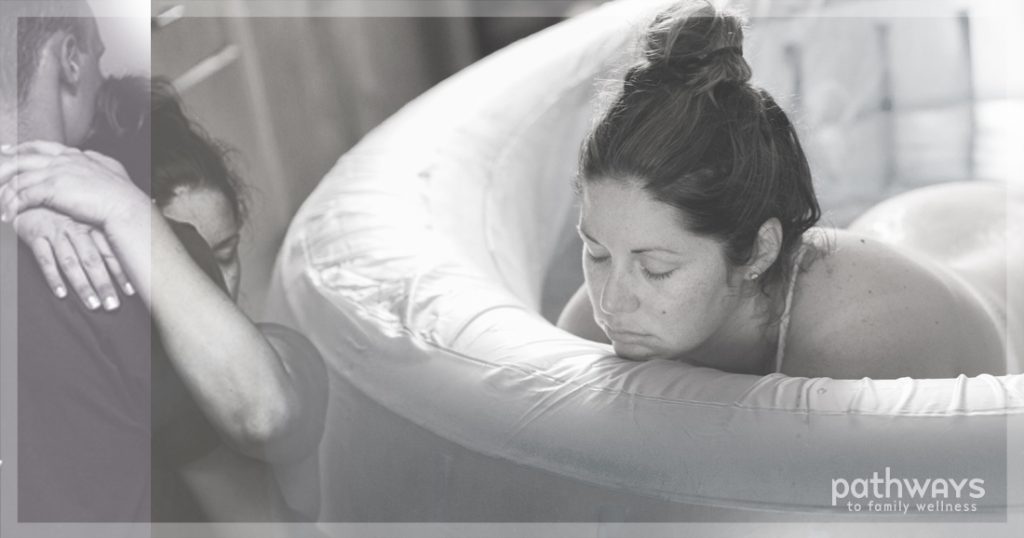 What Mothers Need To Know About Giving Birth

By Jean SuttonThat birth is a cooperative action between the mother and baby. That babies try very hard to assume the...