Gut Instincts: Neuroscientists Have Identified How The Vagus Nerve Communicates With The Brain 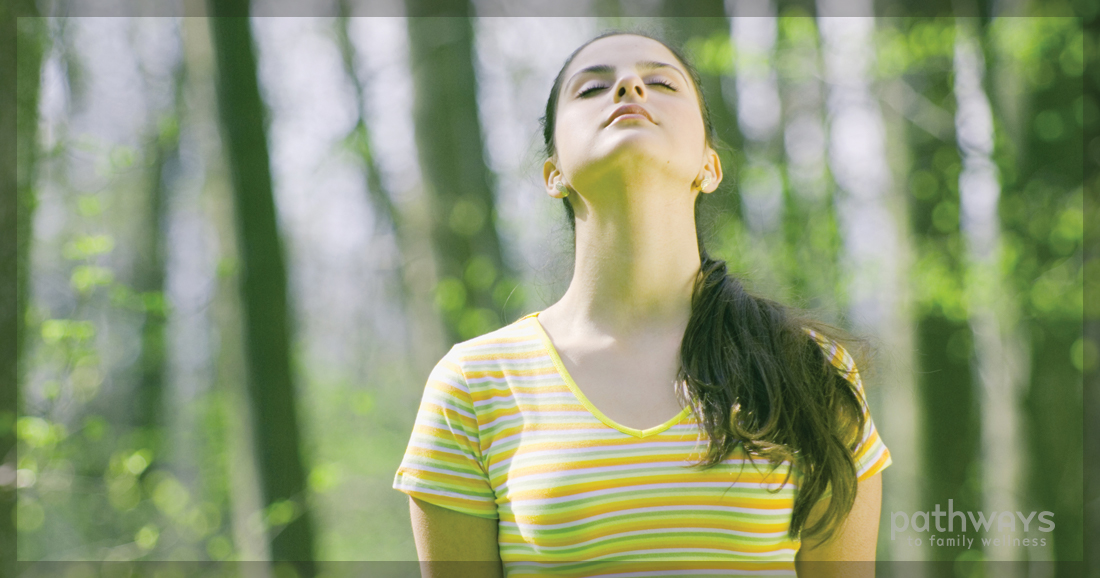 What situations make you feel nervous, fearful, or anxious to the point that you get butterflies and feel sick to your stomach? Are there people, places, or situations in your life that evoke a “fear-conditioned” response? Scientists in Switzerland recently identified how the vagus nerve conveys threatening “gut feelings” to the brain.

The vagus nerve is known as the “wandering nerve,” because it has multiple branches that diverge from two thick stems rooted in the cerebellum and brainstem that meander down to your abdomen, touching your heart and most major organs along the way. Vagus means “wandering” in Latin. The words vagabond, vague and vagrant are all derived from the same Latin root.

A team of scientists led by Urs Meyer, a researcher in professor Wolfgang Langhan’s group at ETH Zurich, has produced a fascinating new study, titled “Gut Vagal Afferents Differentially Modulate Innate Anxiety and Learned Fear.” Published May 21, 2014, in the Journal of Neuroscience, the study identifies how “gut instincts” coming up to the brain via the vagus nerve are linked to different responses to fear.

The vagus nerve is constantly sending updated sensory information about the state of the body’s organs “upstream” to your brain via afferent nerves. In fact, 80 to 90 percent of the nerve fibers in the vagus nerve are dedicated to communicating the state of your viscera up to your brain. (The terms afferent and efferent typically refer to nerves that lead into and out of the brain, respectively. Afferent signals are sent from a nerve receptor into the brain while efferent signals are sent from the brain to the peripheral body.)

Visceral feelings and gut instincts are literally emotional intuitions transferred up to your brain via the vagus nerve. In previous studies, signals from the vagus nerve traveling from the gut to the brain have been linked to modulating mood and distinctive types of fear and anxiety.

As with any mind-body feedback loop, messages also travel “downstream” from your conscious mind through the vagus nerve (via efferent nerves), signaling your organs to create an inner calm so you can “rest and digest” during times of safety, or to prepare your body for fight or flight in dangerous situations.

For the Meyer study, the Swiss scientists snipped the afferent nerve fibers of the vagus nerve going from the gut to the brain in test rats. Cutting the vagus nerve turned the usual feedback loop from a two-way communication into a one-way street. This allowed the researchers to home in on the role that the vagus nerve plays in conveying gut instincts up to the brain.

In particular, the researchers were interested in identifying the link between innate anxiety and conditioned, or learned, fear. In test animals, the brain was still able to send signals down to the stomach, but the brain could no longer receive signals coming back up.

Healthy vagus nerve communication between your gut and your brain uses neurotransmitters such as acetylcholine and GABA (gamma-aminobutyric acid) like the brakes on your car. These neurotransmitters literally lower heart rate and blood pressure, and help your organs slow down so that you can rest and digest.

The Swiss study explored the consequences of a complete disconnection of signals from the gut to the brain and how this affected innate anxiety, conditioned fear, and subsequent neurochemical changes in the brain. In a fear-conditioning experiment, the researchers linked an unpleasant experience to a specific sound. Through a variety of behavioral studies, the researchers determined that rats without a fully functioning vagus nerve were less afraid of open spaces and bright lights than the control group of rats with intact vagus nerves.

However, without the two-way communication of the vagus nerve the rats showed a lower level of innate fear, but a longer retention of learned fear. The results seem to indicate that the vagus nerve is necessary to unlearn a conditioned response of fear. From this discovery, the researchers concluded that an innate response to fear appears to be influenced significantly by “gut instinct” signals sent from the stomach to the brain. This confirms the importance of healthy vagal tone to maintain grace under pressure and to overcome fear conditioning.

In my book, The Athlete’s Way, I write extensively about ways to overcome learned fear and innate anxiety. A simple mantra I’ve used as an athlete to engage my vagus nerve when faced with a threatening challenge is to take a few deep breaths and recite a line by Corra Harris, author of I’d Climb the Highest Mountain: “The bravest thing you can do when you are not brave is to profess bravery and act accordingly.”

Using positive self-talk and taking deep breaths is a quick and easy way to engage the vagus nerve and the parasympathetic nervous system to calm yourself from both the top down and the bottom up.

The most exciting discovery of the Meyer study is that closer scrutiny of the rats’ brains showed the researchers that the loss of signals coming up from the abdomen via the vagus nerve altered the production of both adrenaline and GABA in the brain.

When the researchers switched from a negative to a neutral stimulus, the rats whose gut instincts couldn’t reach the brain via the vagus nerve required significantly longer to reassociate the sound with the new, “safe” and neutral situation. This finding is congruent with other recently published studies which found that stimulation of the vagus nerve can facilitate learning. These new findings about the vagus nerve offer exciting possibilities for the treatment of post-traumatic stress disorder (PTSD).

Stimulation of the vagus nerve might be able to speed up the process by which people with PTSD can learn to reassociate a non-threatening stimuli which triggers anxiety with a neutral, non-traumatic experience. Vagus nerve stimulation (VNS) is currently used to treat epilepsy and depression, although the psychological benefits of VNS remain controversial.

In a press release, Meyer concluded, “We were able to show for the first time that the selective interruption of the signal path from the stomach to the brain changed complex behavioral patterns. This has traditionally been attributed to the brain alone. The study shows clearly that the stomach also has a say in how we respond to fear; however, what it says, i.e., precisely what it signals, is not yet clear.”

The researchers intend to do more research to better understand the exact dialogue between the vagus nerve and the brain, which will hopefully lead to more effective treatments for PTSD and other anxiety disorders.

Editor’s Note: In this fascinating article, we are introduced to the importance of the vagus nerve in terms of mind-body reciprocity. Author Christopher Bergland makes a convincing case that any interference to vagus nerve’s ability to function correctly is worth addressing for normal health and well-being.

The vagus nerve exits from the lower portion of the brain stem through two small openings between the temporal and occipital cranial bones. The occipital bone sits on the atlas, the first cervical vertebrae. Misalignment of the occipital bone or the atlas can disturb normal vagal regulation. As chiropractors, we have made adjustments to these areas that appear to restore vagal nerve system function. This supports regulation of the polyvagal system, a term coined by researcher Stephen Porges to include the parasympathetic, sympathetic, and social vagus.

In keeping within the theme of this issue, we know that many ADD/ADHD and autistic kids appear to demonstrate symptoms relating to unbalanced vagal nerve function. This is just one reason why we see amazing results in these kids when they receive chiropractic adjustments. 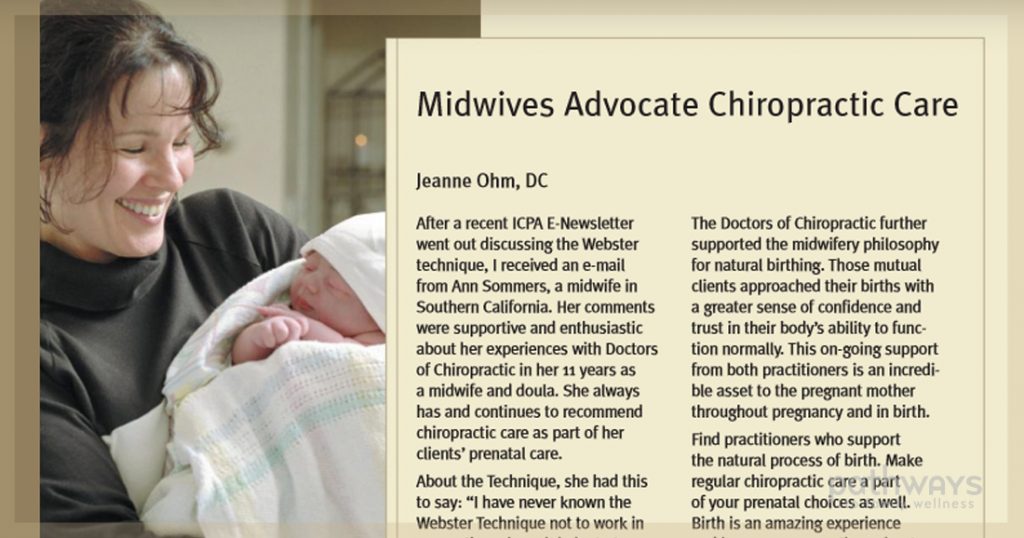 By Jeanne Ohm, DCAfter a recent ICPA E-Newsletter went out discussing the Webster technique, I received an e-mail from Ann Sommers, a... 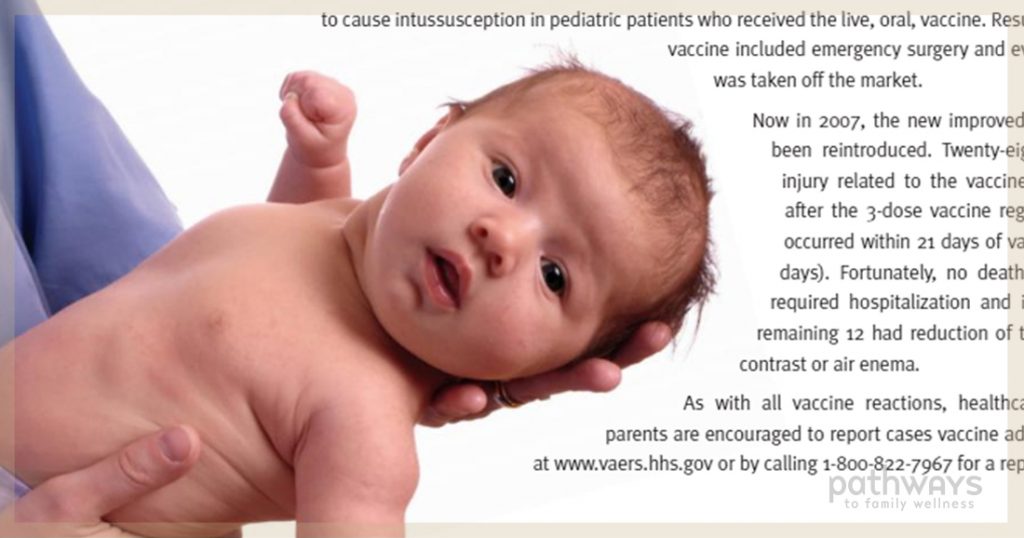 By Pathways MagazineWe sought out chiropractic care because our 6-month-old son, Rex, was very colicky, gassy and suffered from a stuffy... 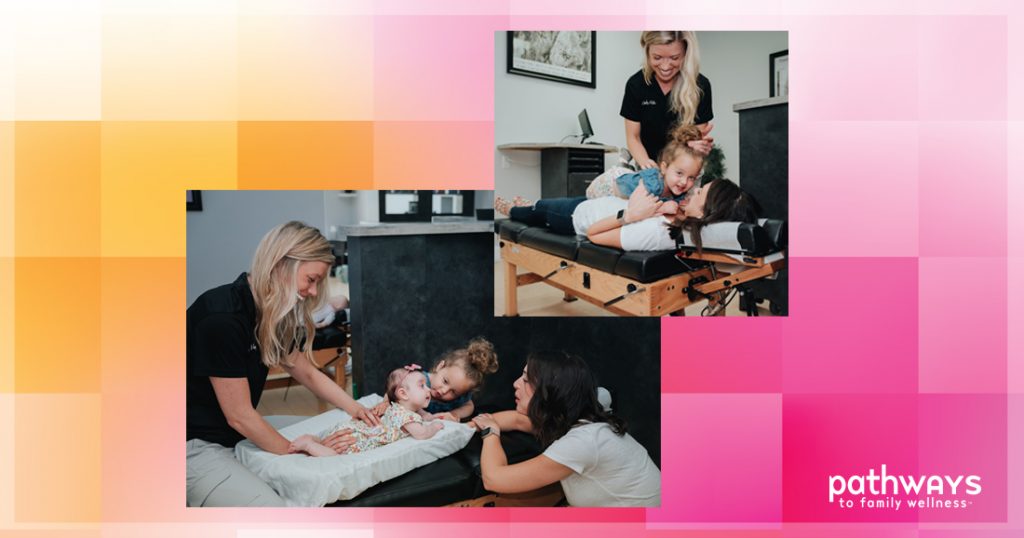 By Ian Shtulman, DC, DACCPKeri had been a mom for six months and she didn't know what to do. Her daughter, Sophie, came...