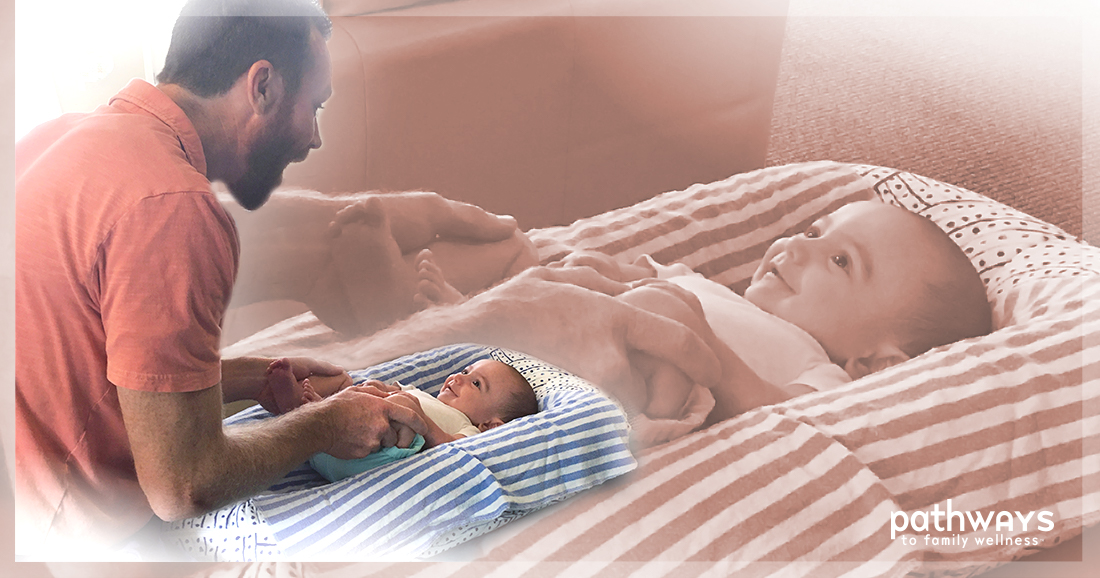 Jack first presented to our office at 9 days old and was having difficulty latching. His parents were seeing a lactation consultant, who observed that his jaw was very tight and he had difficulty opening his mouth to latch. As a result, his mom, Marie, had been pumping and they were feeding him with a syringe, putting a finger in his mouth to make sure he didn’t get oversensitive. They were even switching from holding him on one side to the other to make sure he was getting proper neck mobility, but still he was unable to truly initiate a latch. Both parents were concerned and frustrated, and Marie was also in pain. They were referred to our office by the lactation consultant, as well as a chiropractor that knew the family.

Before we continue with Jack, it’s important to say what an honor it is to be able to check a baby at such a young age. We make sure parents know what a special and important time this is to get adjusted. In fact, one of the joys about working with babies is that the results tend to be quick and dramatic. There is no placebo: Chiropractic simply works. No coaxing, cajoling, or convincing is needed—there is just pure intentionality. On a deep level, infants seem to understand when something is going to help them, and they relax right into the adjustment.

Marie told me that her pregnancy had been uneventful, but that Jack was born “sunny-side up,” meaning he was born looking forward, or occiput posterior. This position can be extremely painful for the mother, and also can cause some bruising on the baby’s head, and can lead to a more difficult birth. This was the case with Jack. Marie relayed that Jack had bruising on the right side of his head, just off center, above his right eye. You could see it on the surface of his skin; his right eye was also squinty.

What was barely visible, but could only be felt, was that Jack had a misalignment of his atlas vertebra, the top bone of the spine. His TMJ (jaw) was tight and his palate had dropped—all on the right side. The combination of these issues meant he had significant difficulty opening his mouth and turning his head. Imagine trying to eat a meal without being able to open your mouth fully or turn your neck. Now you can imagine the difficulty Jack was experiencing, and the concern and frustration of his parents, especially his mother.

Even under the best circumstances, the birth process exerts tremendous pressure upon the newborn—let alone if the baby’s position is less than ideal or if any sort of intervention is used, such as an epidural, Pitocin, forceps, vacuum extraction, or C-section. This is why it’s so important to get newborns checked by a chiropractor trained to work with babies—they’re able to adjust and help unwind those stuck and compromised areas. In turn, the baby will have the best chance to fully develop without undue stress on his growing body. This allows for optimal function.

Once it was clear what we needed to adjust with Jack, we made sure Marie understood what we were going to do: apply a very gentle and specific pressure, no more than the amount you would use to check to see if a tomato is ripe, in order to release the compromised areas. His little body, which at first appeared to be uncomfortable and stuck in a posture toward the right, slowly began to unwind. The ease he began to experience was palpable and visible. His jaw relaxed. His right eye, drawn tight because of the tension, relaxed. His head slowly moved into a comfortable, neutral position. Marie saw it: It was very clear. You could almost hear the sigh of relief, as if he wanted to say, “Ahhh…I’ve been waiting for that.”

We waited a moment, appreciating what had just happened. Then Jack was ready to nurse. This is very common when little ones get an adjustment, especially if they haven’t been able to get a good latch. It’s as if they are making up for lost time—and make up, he did! Marie was able to get him to latch in a way she hadn’t before, and felt such tremendous relief for being able to do so.

We worked with Jack for several months to continue to unwind the tension in his body. Marie worked on his latch and was able to establish a solid breastfeeding routine. That first adjustment paved the way toward future success. 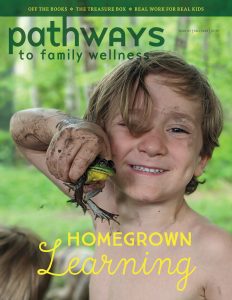 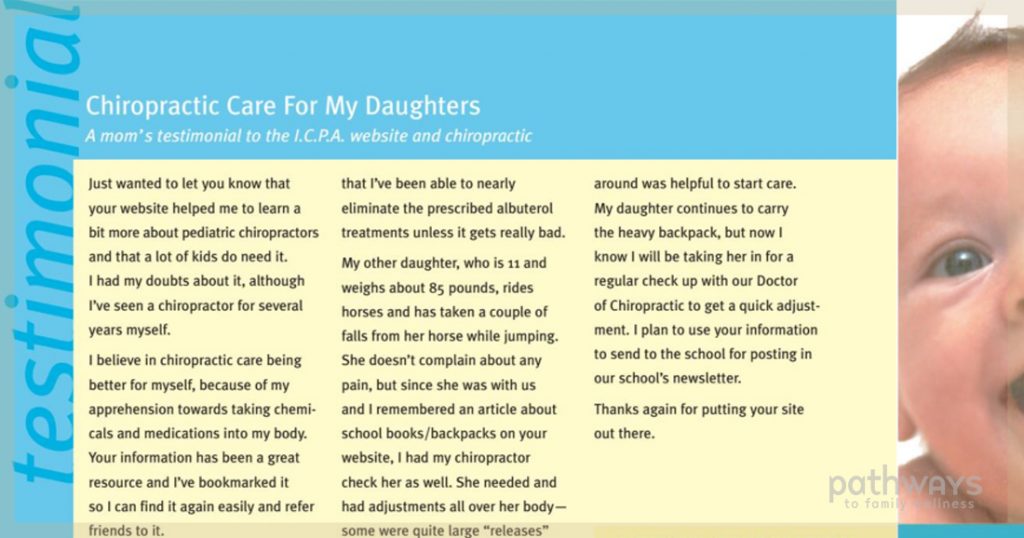 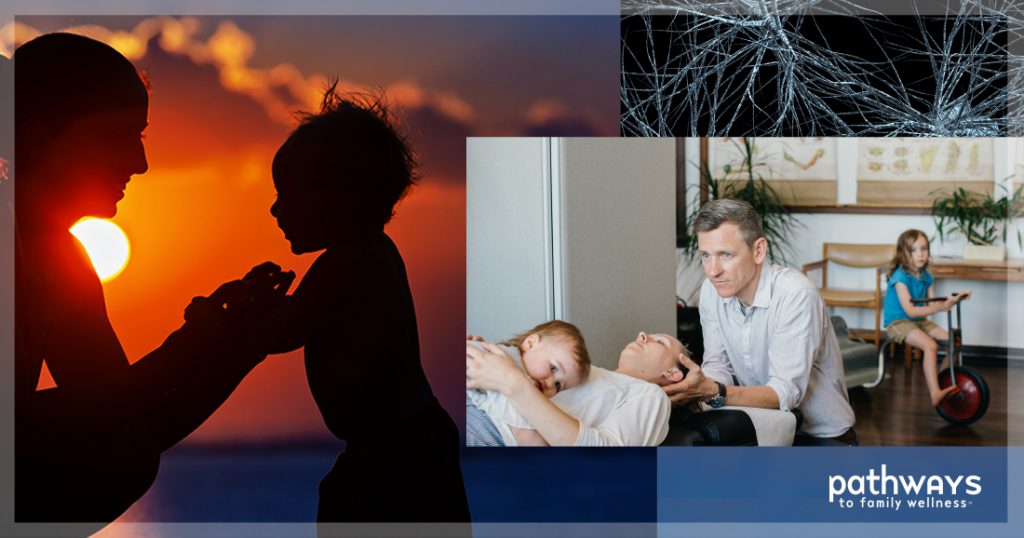 By John OhmUnderstanding Dis-ease From Another PerspectiveDisease is not something to be feared, but rather understood as a natural adaptation to... 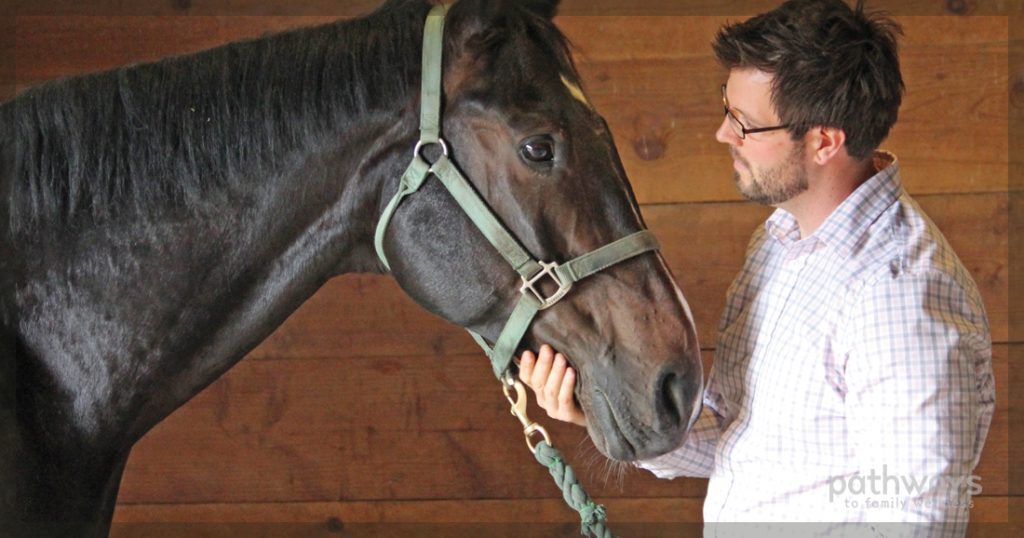 By Austin Komarek, DCThe name of this magazine is Pathways to Family Wellness, and in my world, animals are indeed members of...