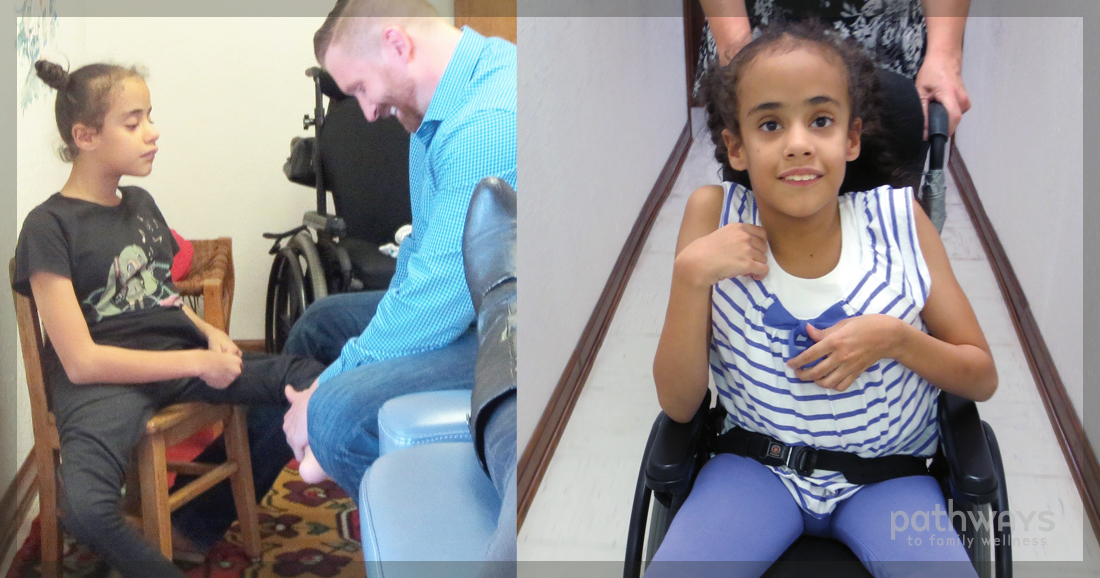 I would like to tell you about my daughter. Giavanna was born with myelomeningocele, the worst form of spina bifida, an opening in the L4 and L5 region of the spine.

Her first surgery, on the day she was born, closed the opening that was affecting her bladder, bowels and lower extremity function. This caused fluid to develop in Gia’s brain, resulting in hydrocephalus; a second surgery placed a ventricle shunt in her head.

She had to be catheterized multiple times during the day to fully drain her bladder, leading to bladder infections. Guilt-ridden, I set out to do the “right thing,” and listened to our doctors. For the first 10 months of her life, Gia was on a maintenance dose of Bactrim, an antibiotic intended to stop bladder infections. When that did not work, doctors put her on stronger antibiotics. At 12 months, she contracted pseudomonas, an opportunistic infection which only appears when a person’s immune system is already impaired. The treatment was more antibiotics into her main artery via a chest port. She had surgery to place a port in her chest, connected to her main artery, and was injected with more antibiotics for one full month. Thankfully, the pseudomonas cleared up, but the bladder infections continued.

Despite these afflictions, she was still growing and learning on the same level and age as a “normal” child. Her vocabulary of 20 words was strong and understandable. She was happy and would laugh, a loving child despite all this heartache. She was a beautiful little girl, with her own method of communication and a loving smile for all she met.

At 15 months, Gia received her routine vaccinations. Within the month, Gia stopped speaking. She would start screaming and cover her ears. No one could touch her; she would gag when certain foods were put in her mouth. She stopped making eye contact and would sway back and forth to soothe herself.

I didn’t know what to do or where to turn. Gia’s pediatrician set up a visit with a group of doctors at Children’s Hospital: she was diagnosed with autistic behavior. Now my child was disabled mentally and physically. I prayed to God to give me strength, and to thank him for my baby. But it was very hard. Everything around me was falling apart, and it seemed to be getting worse, not better.

So for the first seven years of her life, Gia was in and out of the hospital countless times for bladder infections, bladder surgery, three shunt revisions and finally a shunt replacement.

At age 6, Gia started public school; I could not afford the day care. Insurance paid for some of her therapies, and I paid for the rest. All of this took a toll on me financially.

At the school, Gia was known only for her disabilities. Nothing the therapists spoke of was promising. From their point of view, Gia would never progress mentally or physically. Plus, the therapy they were doing seemed to make Gia tighten up rather than become more flexible.

A Ray of Hope

Then on April 29, 2014, things changed dramatically for Gia. I had heard of Dr. Bobby and Oklahaven years before, when a man I worked with told me about the amazing things they have accomplished with children. At that point in my life, I was not prepared for the commitment needed to fully focus on Gia. But now another friend reintroduced me to this amazing woman and offered to pay for Gia’s first visits. Gia’s new journey has begun; life has come full circle.

Dr. Bobby is a chiropractor and she believes that if a child and parent can envision the healing, it will begin to happen with time. We are all human beings full of light and life. When we become injured or are full of toxins in our body, the light and movement diminishes; hence we have disease and disability.

When you first meet Dr. Bobby, you don’t know what to expect. You think to yourself, “She has no clue what I’ve been dealing with. My kid will never do this. And she wants me to do what, or knows my kid can do what?”

No one had ever given me help before in making my child less dependent on me and more independent for herself. Dr. Bobby has very simple philosophies and ideals. They are straightforward and simple, and have been around for many years.

The first week with Dr. Bobby was about getting to know each other. What were all our strengths and weaknesses? What did I expect from my child? What type of schedule did I have in place for adjustments, activities, exercises, food and behavior? Dr. Bobby made me look at my own independence as well as Gia’s. We were shackled to each other and I didn’t even know it.

I talked to Gia as if she were her disability, instead of an intelligent human being. I also was guilty of labeling my child and inhibiting her from what she could do.

I had become very knowledgeable about all of the medical terms associated with Gia. I felt it made me closer to her and gave me a better understanding of my child. But the more I labeled her, the more she depended on me.

When Gia first came to Oklahaven, her body was twisted in ways you could not imagine. Her left arm curled up and she did not use it. Her feet were twisted up and behind to her calf, almost in the opposite direction, like a flower that had not unfolded. Her legs were frogged and did not stretch out. Her muscles were very tight. It was hard to change her diaper. When Gia sat up, she would fall over. Gia could not crawl or creep correctly, normal or low. She could not speak clearly. Gia was not very active.

After the first visit at Oklahaven, Gia’s neck subluxation was corrected and her eyes unlocked. The first thing I had to do was to get rid of Gia’s glasses and start allowing her eyes to move freely. When I put the glasses back on during the process of her eyes correcting themselves, I found that her head and body began to go back to the way it was before. It has been six months since Gia has worn glasses; her eyes are straight, her head is straight, and she can see. It is amazing.

Gia has come so far in six months, so much further than she ever had in the past 11 years with medical treatment. Her forehead used to protrude, almost Neanderthal-like; now it’s becoming more proportioned. Her eyes are brighter, not crossed. She can sit in a dining room chair without any help: She sits very straight, able to eat and do her schoolwork at the table with little or no help.

Gia’s lower back was severely twisted. Her spine has straightened and the hump at the end of her spine has diminished. Before, Gia was not able to crawl; now she can. And because she’s more mobile, she has become more curious.

She is homeschooled, and has become faster at math and reading. Her fine motor skills have improved: She can now use her left hand along with her right. She can buckle her seatbelt, and put on her socks, shoes, shirt, and pants by herself.

Her vocabulary has improved, and she is speaking more clearly when she wants something. I am patiently making her answer questions and teaching her to carry on conversation.

Gia was not able to stand on her knees. She now stands for 45 minutes, and sometimes more. She uses a small stool to sit on, with her feet now flat on the ground. We practice standing from the sitting position.

Gia’s interaction with the family is amazing; she loves to play with her brothers and sisters. She is also starting to play pranks on them. She never did this before. She would laugh at her siblings, but not interact like she does now. I am learning patience, commitment and gratitude. Life looks brighter now, for Gia, our family, and for me. We continue to grow. We are becoming less dependent and more self-reliant.

It’s been a long and challenging journey, and I know it’s not over. We have many more lessons to learn, but thanks to Oklahaven, we are both becoming more independent. 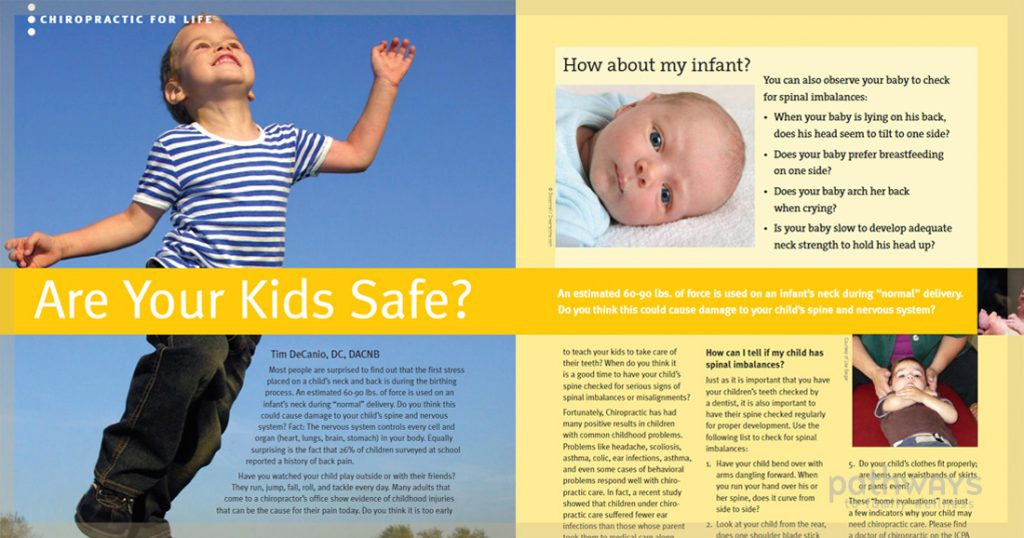 Are Your Kids Safe?

By Tim DeCanio, DCMost people are surprised to find out that the first stress placed on a child's neck and back is... 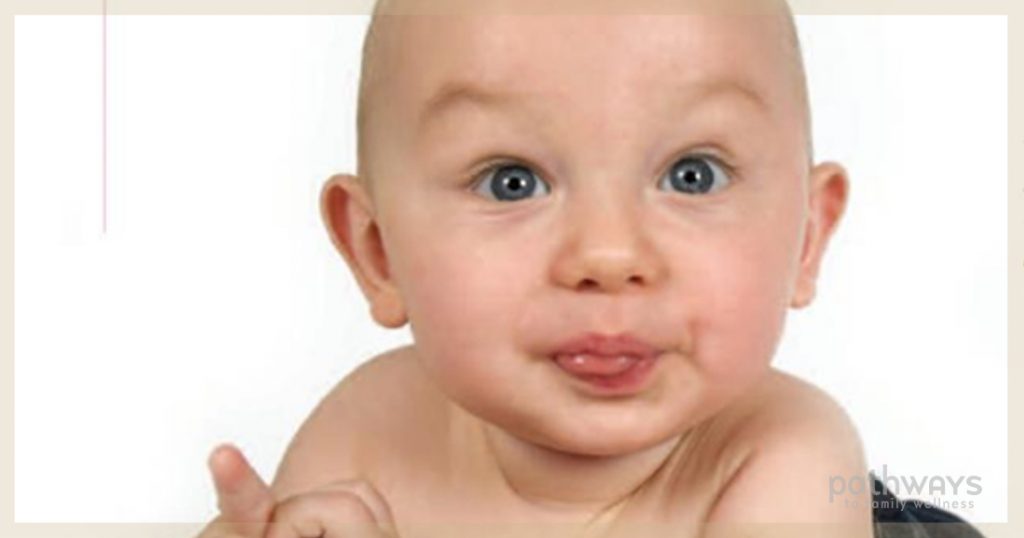 By Joseph Mercola, DOI know antibiotics are not good for my baby, but what do I do if he gets an ear... 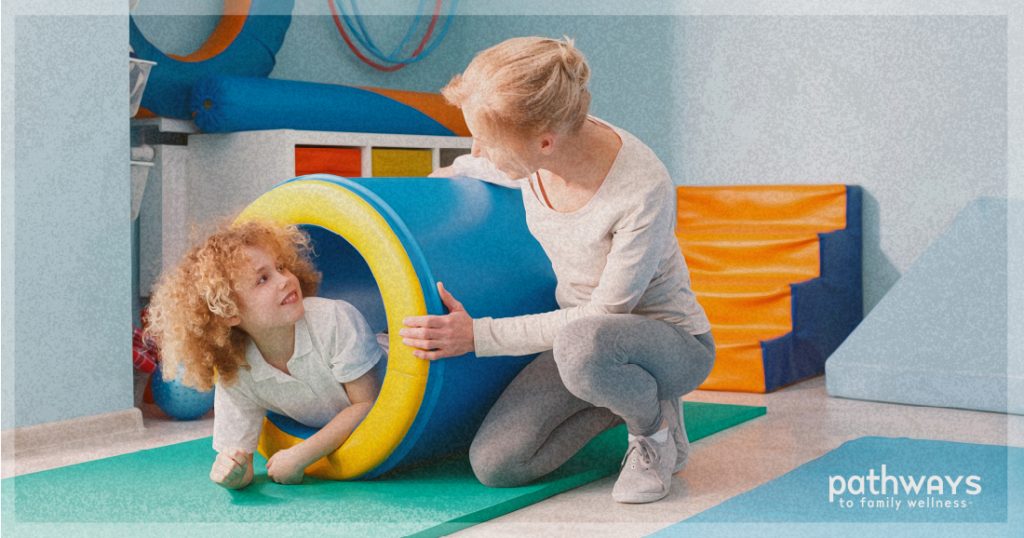 By Mary Beth Crawford, MPTPresent day. I take a few deep breaths to get myself centered and grounded. I want to be fully...